Professor Dhananjay Ravat received his B.Sc. degree in geology from Maharaja Sayajirao University of Baroda, India, and M.S. and Ph.D. degrees in geophysics from Purdue University, USA.  He has taught and conducted research at Southern Illinois University Carbondale in Illinois, USA (1991-2007) and since then at University of Kentucky on topics pertaining to exploration of the earth and planets with gravity and magnetic fields, solid-earth geophysics, tectonics and environmental geophysics. From August 2007, he joined University of Kentucky, where he has been the Chair of Department of Earth & Environmental Sciences. He is presently an associate editor of Frontiers in Earth Science - Solid Earth section. He also has been an associate editor of Geophysics (2001-2005), Near Surface Geophysics (2008-2017), and has edited special issues of Seismological Research Letters, The Leading Edge, and International Journal of Earth Science. He is a life member of Geological Society of India (Fellow), American Geophysical Union, Society of Exploration Geophysicists, International Association of Mathematical Geology and a member of American Association for the Advancement of Science.

We collaborate with researchers from the world over

One of the most exciting recent projects we have been involved with is using high-resolution spectral magnetic methods to study the thermal structure of Aeolian volcanoes in Italy. The reference to our De Ritis et al. (2013) paper on this topic can be found in the Academics section.

Currently, we are also involved in a NSF-funded project on Deciphering the Structure and Evolution of North America’s Cratonic Core using EarthScope seismic and potential-field data. In this context, we have already developed a new spectral magnetic depth determination method (Salem et al., 2014) and also a method for computing geotherms with the constraints from the Curie-depths found from magnetic anomaly data.

We have also been involved in the preparation of the World Digital Magnetic Anomaly Map published in 2007 by UNESCO and CGMW and initiated by IAGA/IUGG. The data and maps are available at: http://ftp.gtk.fi/WDMAM2007/ and its updated version WDMAM 2.0 published in 2015 (http:// www.wdmam.org ). Interpretation of this map in the context of the geology and geophysics of the world and improvements to these data to facilitate the third edition of this map are underway.

In addition, we are also involved in improving magnetic anomaly data for the United States collected during the National Uranium Resource Evalutation (NURE) project during 1970s using new methodologies. Our long-wavelength corrected US magnetic database and report is presently available at: http://pubs.usgs.gov/of/2009/1258/.  The data for individual U.S. States is available at: http://pubs.usgs.gov/of/2009/1129/ . 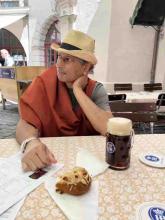