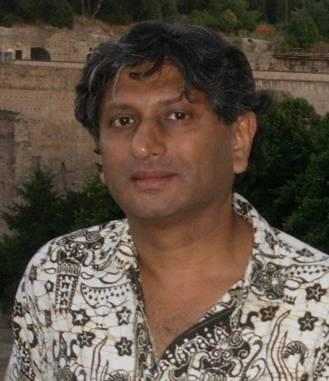 LEXINGTON, Ky – The Earth’s mantle has spontaneous magnetism, contrary to what was believed until recently, and one University of Kentucky College of Arts & Sciences professor wants geophysicists to go figure out why.

Dhananjay Ravat, professor of geophysics, co-wrote a paper recently in Nature Reviews/Earth and Environment that explores reasons for the magnetism  in the Earth’s mantle. Basically, the prevailing wisdom was that mantle could not  be magnetic.

So what gives? The problem dates back to the launching of satellites in the late 1960s and ‘70s with magnetometers attached. Those devices picked up some strong magnetic anomalies that puzzled scientists.

“When satellites with magnetometers came along in the 1970s – the  analysis techniques were crude compared to today’s standards – and yet those early magnetometers could see these variations, and those variations were very large," he said. "Producing that level of magnetism in the Earth’s crust would be very difficult. People began to think about what strength of magnetism was necessary to reproduce that field. Those were so strong that we were not able to find any rocks that would form that extensive a field. So people began thinking about magnetic sources in the Earth’s mantle, which is just below the crust.”

The problem with that lies in the idea that minerals in the mantle get too hot to hold onto magnetic properties. Basically, the mantle should not be magnetic.

"Ferromagnetic materials demagnetize at very high temperatures, and that temperature is known as Curie point, after Madame Curie’s husband Pierre Curie,” he said. “This happens with the two magnetic minerals that are most common: One is magnetite and the other is hematite. The Curie point for them is generally reached about 30 kilometers down and still be in the crust. Whenever people found magnetic rocks in the mantle, they said that alteration made iron in them ferromagnetic. In essence, people hedged their bets and figured that one way or the other the mantle should be considered non-magnetic.

“When researchers looked at rocks that had been part of the Earth’s mantle but because of volcanic activity had come to the surface, they didn’t find magnetic properties. Some of my friends at the NASA/Goddard Space Flight Center at the time were working on this. They hypothesized a concept that the crust mantle boundary is also a magnetic boundary. When that hypothesis took hold, for the last 50 years, people have been using it on and on and on, but still we had not found the sources of these very strong magnetic anomalies. Even I went on believing that mantle must be non-magnetic.”

Those strong anomalies can be found in specific places such as Bangui in Africa as well as places in Canada, Europe and Australia. Ravat and his colleagues suggest examining xenoliths, which are mantle rocks embedded in magma, that can be confirmed as unaltered using modern techniques to see if they retain any magnetism from when they were part of the Earth’s mantle.

“There are also magnetic anomaly based methods which can detect the base of magnetization. And so I started looking at the very old regions in Canada and then Australia.  With these new methods, new maps and new techniques, we were able to detect magnetism in the uppermost mantle," he said.

Ravat’s review paper, written with colleagues Eric C. Ferré, Ilya Kupenko, Fátima Martín-Hernández and Carmen Sanchez-Valle, concludes that certain phases of iron oxides can be magnetic even deeper beneath the boundary between the Earth’s crust and the mantle, and that researchers need to do more work to find out how deep they may go -- some of his colleagues think they may go even as deep as 600-700 kilometers beneath the surface where tectonic plates dive underneath the Earth’s crust. He notes in the paper that new spectral analyses show that magnetic sources do lie within the uppermost mantle: a remarkable imaging and reimagining of one facet of the planet.

“We hope to develop better imaging techniques as well as an understanding of magnetism at very high temperatures and high pressures,” he said.